“As an entrepreneur, you’re rapidly dealing with different issues, and your ability to switch from one issue to another is very important.”

Adeo Ressi is an American entrepreneur and investor who is best known as the founder and CEO of TheFunded and The Founder Institute.[1] He has been a fixture in the Silicon Valley since creating TheFunded in 2007.[2] His previous business ventures include methodfive, Game Trust, and Total New York.[3] He has also sat on the board of the X Prize Foundation.[4] In 2014, he founded a venture capital investment company called Expansive Ventures.[2]

Born Adeodato Gregory Ressi di Cervia, Ressi is Italian-American,[5] and was raised in New York City‘s Upper West Side. As a child, he asked his parents to send him to Arcosanti, an experimental town in Arizona, rather than traditional summer camp. He spent four summers in Arcosanti as its youngest working resident. He was often tasked with performing menial jobs[3] like cleaning out sewage pipes.[4] His experiences at Arcosanti piqued his interest in environmental issues and influenced his career path to some degree.[3]

Ressi attended college at the University of Pennsylvania where he spent time as a housemate of PayPal co-founder, Elon Musk. Ressi and Musk opened an unofficial “nightclub” at their house, boasting as many as 500 patrons on a single night.[6] As an undergraduate, he founded the Social Revolutionary Club[4] and started an environment-themed campus newspaper called, Green Times. He was an environmental studies major.[7] He spent 4 years at the university but did not receive his degree, because he wanted to use copies of Green Times as his senior thesis instead of writing a traditional paper.[3]

After ending his collegiate career, Ressi co-founded Total New York, a localized news website, in 1994.[4] In 1997, America Online purchased Total New York for an undisclosed amount of money[3] and redubbed it AOL Digital City.[4] He founded methodfive, a web development firm, in 1995 and sold it to Xceed in 2000 for $88 million. Ressi used the money from his previous two ventures to found Game Trust, a developer of online casual game infrastructure, in 2002.[3] Game Trust had a successful first round of funding in 2003, securing investments from Silicon Alley Venture Partners and Intel Capital.[4] 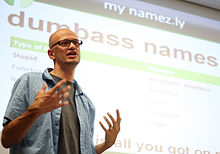 Adeo Ressi speaking at a conference in 2010.

The second round of funding was due to be provided by Softbank Capital in 2005. On the day of the deal, however, representatives from Softbank informed Ressi that they were pulling out. The investment would have been worth $10 million. Because Ressi was contractually obligated to not seek other investors while negotiating with Softbank, Game Trust was left with little remaining capital. Ressi was forced to take out a bridge loan from existing investors to keep Game Trust afloat. Even so, by the fall of 2005, Game Trust had secured $9 million in funding, including $3 million from TWJ Capital. After a failed development project at Game Trust in 2006, Elon Musk was voted off the board of directors and replaced with the son of TWJ Capital founder, Thomas Jones. Jones would try unsuccessfully to take control of Game Trust away from Ressi.[4]

Ressi eventually sold Game Trust to RealNetworks in 2007, but his experience with venture capitalists led him to start TheFunded in 2007. The website is designed to allow entrepreneurs to write anonymous reviews about venture capital groups and their processes. The website was met with derision from venture capital groups,[3] but proved to be popular among entrepreneurs. Ressi intended to keep the site anonymous, but news about its existence leaked to TechCrunch. The site had 1,000 anonymous entrepreneur members by March 2007. In order to remain anonymous himself, Ressi adopted the pseudonym of “Ted.” In November 2007, Ressi decided to reveal his identity in a piece in Wired.[4][8] By January 2008, TheFunded had 3,600 members.[3]

In 2009, Ressi embarked on another venture called The Founder Institute, a startup incubator and entrepreneur training program headquartered in Palo Alto, California.[7] The goal of the institute is to combat startup failure and “globalize Silicon Valley.”[9] As of 2014, the institute had expanded to over 80 cities[10] and 40 nations worldwide.[11] Ressi wanted to help entrepreneurs create better businesses, and he also wanted to understand the ingredients for a successful entrepreneur.[1] Ressi founded Expansive Ventures in 2014, an investment firm that will work closely with mentors from The Founder Institute. Expansive Ventures is, however, a wholly separate entity.[2]

This profile is partly adapted from a Wikipedia entry on Adeo Ressi, available under the Creative Commons Attribution-ShareAlike License.