“Each of us is better for having to make our own way in the world.”

Amadeo Pietro Giannini, also known as Amadeo Peter Giannini or A.P. Giannini (May 6, 1870 – June 3, 1949), born in San Jose, California, was an American banker who founded the Bank of America.[1]

A.P. Giannini was the first son of Luigi and Virginia Giannini. Luigi Giannini immigrated to the United States, to prospect in response to the California Gold Rush of 1849, from Favale di Malvaro near Genoa, Liguria in the Kingdom of Sardinia (later part of Italy). Luigi continued in gold during the 1860s and returned to Italy in 1869 to marry Virginia, bringing her back to the US and settling in San Jose. Luigi Giannini purchased a 40-acre farm at Alviso in 1872 and grew fruits and vegetables for sale. Four years later Luigi Giannini was fatally shot by an employee over a pay dispute. Virginia (a widow at the age of 21 with two children and pregnant with a third child) took over operation of the produce business, bringing the adolescent Amadeo into the business. In 1880, Virginia married Lorenzo Scatena who began L. Scatena & Co. (which A.P. Giannini would eventually take over). Amadeo attended Heald College and, at the age of 13, realized he could do better in business than at school. He dropped out and took a full-time position as a produce broker for L. Scatena & Co.

He started in business as a produce broker, commission merchant and produce dealer for farms in the Santa Clara Valley. He was extremely successful in that business. He married Clorinda Cuneo, daughter of a North Beach real estate magnate, in 1892 and eventually sold his interest to his employees and retired at the age of 31 to administer his father-in-law’s estate. He later became a director of the Columbus Savings & Loan, in which his father-in-law owned an interest. At the time, banks were run for the benefit of the wealthy and the well-connected. Giannini observed an opportunity to service the increasing immigrant population that were without a bank. At loggerheads with the other directors who did not share his sentiment, he quit the board in frustration and started his own bank.

He founded the Bank of Italy in San Francisco on October 17, 1904. The bank was housed in a converted saloon as an institution for the “little fellow”. It was a new bank for the hardworking immigrants other banks would not serve. He offered those ignored customers savings accounts and loans, judging them not by their wealth, but by their character.

Deposits on that first day totaled $8,780.[2] Within a year, deposits soared above $700,000 ($13.5 million in 2002 dollars). The 1906 San Francisco earthquake and fires leveled much of the city. In the face of widespread devastation, Giannini set up a temporary bank, collecting deposits, making loans, and proclaiming that San Francisco would rise from the ashes.

Immediately after the earthquake, he moved the vault’s money to his home outside the fire zone in then-rural San Mateo, 18-miles by horse and wagon. The money was moved in a garbage wagon, owned by Hayward resident Giobatta Cepollina, also a native of Italy (Loano). The cargo was disguised beneath garbage to protect against theft. The fires severely heated the vaults of other big banks. Opening them immediately would ruin the money, so they were kept closed for weeks. Because of this, Giannini was one of the few who were able to provide loans. Giannini ran his bank from a plank across two barrels in the street. Giannini made loans on a handshake to those interested in rebuilding. Years later, he would recount that every loan was repaid. As further testament to the trust Giannini garnered in the local community, as a reward to the local garbage man for helping to transport the bank’s reserves, Giannini agreed to give the man’s son his first job with the bank when he came of age. Giannini kept his promise, hiring young Frank Joseph Cepollina at age 14. Cepollina later retired from the bank at age 41.[3]

By 1916, Giannini had expanded and opened several other branches. Giannini believed in branch banking as a way to stabilize banks during difficult times as well as expand the capital base. He bought banks throughout California and eventually had more than five hundred branches throughout the state.

In 1928, Giannini approached Orra E. Monnette, president and chairman of the Bank of America, Los Angeles, about a merger of the two financial institutions. Upon finalizing the merger, Giannini and Monnette concurred that the Bank of America name idealized the broader mission of the new bank. The new institution continued under Giannini’s chairmanship until his retirement in 1945; Monnette retained his Board seat and officer’s position. Prior to Monnette’s creation of the Bank of America Los Angeles network, most banks were limited to a single city or region. Monnette was the first to create a system of centralized processing, bookkeeping and cash delivery. By diversifying the scope of community that the Bank of America served following its merger, the institution was better prepared to ride out minor, local economic issues.

Giannini is credited as the inventor of many modern banking practices. Most notably, Giannini was one of the first bankers to offer banking services to middle-classAmericans, rather than the upper class. He also pioneered the holding company structure and established one of the first modern trans-national institutions.

Giannini helped nurture the motion picture and wine industries in California. He loaned Walt Disney the funds to produce Snow White, the first full-length, animatedmotion picture to be made in the US. During the Great Depression, he bought the bonds that financed the construction of the Golden Gate Bridge. During World War II, he bankrolled industrialist Henry Kaiser and his enterprises supporting the war effort. After the war, he visited Italy and arranged for loans to help rebuild the war-torn Fiat factories. Giannini also provided capital to William Hewlett and David Packard to help form Hewlett-Packard.

Giannini founded another company, Transamerica Corporation, as a holding company for his various interests, including Occidental Life Insurance Company. At one time, Transamerica was the controlling shareholder in Bank of America. They were separated by legislation enacted by the U.S. Congress in 1956, when Congress passed the Bank Holding Company Act, which prohibited bank holding companies’ involvement in industrial activities.

Upon Giannini’s death in 1949, his son Mario Giannini assumed leadership of the bank. Giannini’s daughter, Claire Giannini Hoffman (1905–1997), took her father’s seat on the bank’s board of directors, where she remained until the 1980s. Giannini is buried at Holy Cross Cemetery in Colma, California.

The large plaza of the Bank of America Building, at California Street and Kearny, in downtown San Francisco, is named for Giannini. A.P. Giannini Middle School, which opened in the Sunset District of San Francisco in 1954, is named after him also.[4] Other places and groups named after Giannini include The Giannini Foundation of Agricultural Economics and the building that houses the Department of Agricultural and Resource Economics, at the University of California, Berkeley. 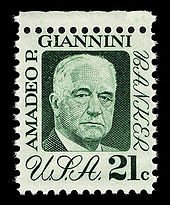 The U.S. Postal Service honored Giannini’s contributions to American banking by issuing a 21¢ postage stamp bearing his portrait, in 1973. A ceremony to mark the occasion was held near his former home, in San Mateo.

Time magazine named Giannini one of the “builders and titans” of the 20th century. He was the only banker named to the Time 100, a list of the most important people of that century, as assembled by the magazine.

The Italian-American banker played by Edward G. Robinson in House of Strangers (1949), was also loosely based on Giannini.

American Banker magazine recognized him as one of the five most influential bankers of the 20th Century.[citation needed]

In 2004, the Italian government honored Giannini with an exhibition and ceremony in its Parliament, to mark the centennial of his founding of the Bank of Italy. The exhibition was the result of the collaboration of the Ministry of Finance, the Smithsonian Institution, Italian Professor Guido Crapanzano and Peter F. De Nicola, an American collector of Giannini memorabilia.[citation needed]

In 2010, Giannini was inducted into the California Hall of Fame.

This profile is partly adapted from a Wikipedia entry on Amadeo Giannini, available under the Creative Commons Attribution-ShareAlike License.