“The fastest way to break the cycle of perfectionism and become a fearless mother is to give up the idea of doing it perfectly – indeed to embrace uncertainty and imperfection.”

Arianna Huffington (née Stasinopoúlou; born Αριάδνη-Άννα Στασινοπούλου, July 15, 1950) is a Greek-American author, syndicated columnist, and occasional actress. She is the co-founder and editor-in-chief of The Huffington Post.[1][2] She was a popular conservative commentator in the mid-1990s, after which, in the 1990s, she became a liberal.[3] She is the former spouse of former Republican congressman Michael Huffington.

In 2003, she ran as an independent candidate for Governor in the California recall election.[4]

Huffington was born Ariadnē-Anna Stasinopoúlou[citation needed] (Αριάδνη-Άννα Στασινοπούλου) in Athens, Greece, the daughter of Konstantinos (a journalist and management consultant) and Elli (née Georgiadi) Stasinopoulou, and is the sister of Agapi (an author, speaker and performer).[citation needed] She moved to the United Kingdom at the age of 16, and studied economics at Girton College, Cambridge, where she was the first foreign, and third female[9] President of the Cambridge Union.[10]

In 1971, she appeared in an edition of Face the Music along with Bernard Levin. A relationship developed, of which she wrote, after his death: “He wasn’t just the big love of my life, he was a mentor as a writer and a role model as a thinker.”[11] Huffington began writing books in the 1970s, with editorial help from Levin.[citation needed] The two traveled to music festivals around the world for the BBC. They spent summers touring three-star restaurants in France. At the age of 30, she remained deeply in love with him but longed to have children; Levin never wanted to marry or have children. Huffington concluded that she must break away, and moved to New York in 1980.[11]

In 1973, Arianna (as Stasinopoúlou) wrote a book titled The Female Woman, attacking the Women’s Liberation movement in general and Germaine Greer‘s 1970 The Female Eunuch in particular. In the book she wrote, “Women’s Lib claims that the achievement of total liberation would transform the lives of all women for the better; the truth is that it would transform only the lives of women with strong lesbian tendencies.”[12]

In the late 1980s, Huffington wrote several articles for National Review. In 1981, she wrote a biography of Maria Callas, Maria Callas – The Woman Behind the Legend, and in 1989, a biography of Pablo Picasso, Picasso: Creator and Destroyer.[13]

Huffington rose to national prominence during the unsuccessful Senate bid in 1994 by her then husband, Republican Michael Huffington. She became known as a reliable supporter of conservative causes such as Newt Gingrich‘s “Republican Revolution” and Bob Dole‘s 1996 candidacy for president. She teamed up with liberal comedian Al Franken as the conservative half of “Strange Bedfellows”[14] during Comedy Central‘s coverage of the 1996 U.S. presidential election. For her work, she and the writing team of Politically Incorrect were nominated for a 1997 Emmy for Outstanding Writing for a Variety or Music Program.[15] She has also made a few forays into acting with roles on shows such as Roseanne, The L Word, How I Met Your Mother, Help Me Help You, and the film EdTV.

As late as 1998, Huffington still aligned herself with the right. During that year she did a weekly radio show in Los Angeles called “Left, Right & Center”, that “match[ed] her, the right-winger, against a self-described centrist policy wonk, Matt Miller, and a veteran leftist journalist, Robert Scheer.”[9] In an April 1998 profile in The New Yorker, Margaret Talbot wrote that “Most recently, she has cast herself as a kind of Republican Spice Girl – an endearingly ditzy right-wing gal-about-town who is a guilty pleasure for people who know better.” Huffington described herself by side-stepping the traditional party divide, saying “the right/left divisions are so outdated now. For me, the primary division is between people who are aware of what I call ‘the two nations’ (rich and poor), and those who are not.”[9] 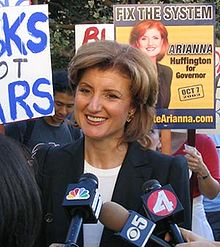 Campaigning for Governor of California, 2003

In a 2004 appearance on The Daily Show with Jon Stewart, she announced her endorsement of John Kerry by saying, “When your house is burning down, you don’t worry about the remodeling.”[19] Huffington was a panel speaker during the 2005 California Democratic Party State Convention, held in Los Angeles. She also spoke at the 2004 College Democrats of America Convention in Boston, which was held in conjunction with the 2004 Democratic National Convention. Huffington is also a regular panelist on the nationally syndicated weekend radio program, Both Sides Now with Huffington & Matalin,[20] hosted by Mark Green.

Huffington serves on the board of directors of the Center for Public Integrity.[21]

She is also a One Young World Counsellor, speaking to One Young World delegates at Summits in Johannesburg, South Africa in 2013 and Dublin, Ireland in 2014. She spoke about her “third metric” for success [22] and the value of youth leadership.[23]

Huffington was an independent candidate in the 2003 recall election of California governor Gray Davis. She described her candidacy against frontrunner Arnold Schwarzenegger as “the hybrid versus the Hummer,” making reference to her ownership of a hybrid vehicle, the Toyota Prius, and Schwarzenegger’s Hummer. The two would proceed to have a high-profile clash during the election’s debate, during which both candidates were rebuked for making personal attacks.[citation needed]

Despite briefly retaining former U.S. Senator Dean Barkley as a campaign adviser and advertising executive Bill Hillsman as her media director, she dropped out of the race on September 30, 2003 and endorsed Governor Gray Davis’ campaign to vote against the recall. Others attributed her exit to her inability to garner support for her candidacy, noting that polls showed that only about 2 percent of likely California voters planned to vote for her at the time of her withdrawal.[24] Though she failed to stop the recall, Huffington’s name remained on the ballot and she placed 5th, capturing 47,505 votes or 0.55% of the vote.

Huffington was a panelist on the weekly BBC Radio 4 political discussion programme, Any Questions?, and the BBC television panel games Call My Bluff and Face the Music.[25] She served as co-host of BBC’s late night chat show Saturday Night at The Mill for four weeks before viewer complaints caused her to be dropped from the show.[26] 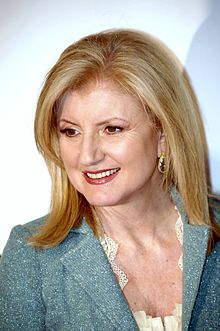 Huffington at the 2011 Tribeca Film Festival

Huffington at one point was the co-host of the weekly, nationally syndicated, public radio program Both Sides Now, along with Mary Matalin, former top aide to the Bush/Cheney White House. Every week on Both Sides Now, Huffington and Matalin discussed the nation’s relevant political issues, offering both sides of every issue to the listeners. Both Sides Now was hosted by former Air Radio America President and HuffPost blogger Mark J. Green.[20]

Prior to The Huffington Post, Huffington hosted a website called Ariannaonline.com. Her first foray into the Internet was a website called Resignation.com, which called for the resignation of President Bill Clinton and was a rallying place for conservative people opposing Clinton. She wrote about Clinton resigning, “Only some act of sacrifice can begin to restore the image of the President that we are left with from the Starr report — a man of staggering narcissism and self-indulgence, whom nobody dared gainsay, investing his energies first in gratifying his sexual greeds and then in using his staff, his friends and the Secret Service to cover up the truth.”[27]

In November 2008, Huffington joined the cast of Seth MacFarlane‘s animated series, The Cleveland Show, where she lends her voice to the wife of Tim the Bear, also named Arianna.[28]

Huffington appeared as herself in the May 10, 2010, episode of the CBS sitcom How I Met Your Mother.

Huffington participated in the 24th annual “Distinguished Speaker Series” at the University at Buffalo, NY., on September 16, 2010. She headlined a debate against radio co-host Mary Matalin on current world events, political issues, and the local Buffalo economy. The University at Buffalo “Distinguished Speaker Series” has featured a multitude of world-renowned politicians and celebrities such as; Tony Blair, Bill Nye, Jon Stewart, and the Dalai Lama.[30]

Huffington offered to provide as many buses as necessary to transport those who wanted to go to Jon Stewart’s Rally to Restore Sanity and/or Fear on October 30, 2010, from the Huffington Post Headquarters in New York City.[31] Ultimately, she paid for 150 buses to ferry almost 10,000 people from Citi Field in Queens to RFK Stadium in DC.

Huffington played herself in the Family Guy episode “Brian Writes a Bestseller” along with Dana Gould and Bill Maher in a live segment of Real Time with Bill Maher.

In 2012, Huffington became a LinkedIn Influencer, writing about success and sharing professional insights.[32]

This profile is partly adapted from a Wikipedia entry on Arianna Huffington, available under the Creative Commons Attribution-ShareAlike License.