“The world is moving, and a company that contents itself with present accomplishments soon falls behind.”

George Eastman (July 12, 1854 – March 14, 1932) was an American innovator and entrepreneur who founded the Eastman Kodak Company and popularized the use of roll film, helping to bring photography to the mainstream. Roll film was also the basis for the invention of motion picture film in 1888 by the world’s first film-makers Eadweard Muybridge and Louis Le Prince, and a few years later by their followers Léon Bouly,Thomas Edison, the Lumière Brothers, and Georges Méliès.

He was a major philanthropist, establishing the Eastman School of Music, and schools of dentistry and medicine at the University of Rochester and in London; contributing to the Rochester Institute of Technology (RIT) and the construction of several buildings at MIT‘s second campus on the Charles River. In addition he made major donations to Tuskegee and Hampton universities, historically black universities in the South. With interests in improving health, he provided funds for clinics in London and other European cities to serve low-income residents.

In his final two years, Eastman was in intense pain caused by a disorder affecting his spine. On March 14, 1932, Eastman shot himself in the heart, leaving a note which read, “To my friends: my work is done. Why wait?”[2]

The George Eastman House, now operated as the International Museum of Photography and Film, has been designated a National Historic Landmark. Eastman is the only person represented by two stars in theHollywood Walk of Fame in the same category, for his invention of roll film.

Eastman was born in Waterville, New York[3] to George Washington Eastman and Maria Eastman (née Kilbourn), the youngest child, at the 10-acre farm which his parents bought in 1849. He had two older sisters, Ellen Maria and Katie.[4] He was largely self-educated, although he attended a private school in Rochester after the age of eight.[4] In the early 1840s his father had started a business school, the Eastman Commercial College in Rochester, New York, described as one of the first “boomtowns” in the United States, based on rapid industrialization.[4] As his father’s health started deteriorating, the family gave up the farm and moved to Rochester in 1860.[4] His father died of a brain disorder in May 1862. To survive and afford George’s schooling, his mother took in boarders.[4]

Maria’s second daughter, Katie, had contracted polio when young and died in late 1870 when George was 16 years old. The young George left school early and started working to help support the family. As Eastman began to experience success with his photography business, he vowed to repay his mother for the hardships she had endured in raising him.[5]

In 1884, Eastman patented the first film in roll form to prove practicable; he had been tinkering at home to develop it. In 1888, he perfected the Kodak camera, the first camera designed specifically to use roll film. In 1892, he established the Eastman Kodak Company, in Rochester, New York. It was one of the first firms to mass-produce standardized photography equipment. The company also manufactured the flexible transparent film, devised by Eastman in 1889, which proved vital to the subsequent development of the motion picture industry.

He started his philanthropy early, sharing the income from his business to establish educational and health institutions. Notable among his contributions were a $625,000 gift in 1901 (equivalent to $17.7 million in present-day terms[6]) to the Mechanics Institute, now Rochester Institute of Technology; and a major gift in the early 1900s to the Massachusetts Institute of Technology, which enabled the construction of buildings on its second campus by the Charles River.[7] MIT opened this campus in 1916.[8]

George Eastman never married. He was close to his mother, and to his sister and her family. He had a long platonic relationship with Josephine Dickman, a trained singer and the wife of business associate George Dickman, becoming especially close to her after the death of his mother, Maria Eastman, in 1907. He was also an avid traveler and had a passion for playing the piano. [9]

The loss of his mother, Maria, was particularly crushing to George. Almost pathologically concerned with decorum, he found himself unable for the first time to control his emotions in the presence of friends. “When my mother died I cried all day”, he explained later. “I could not have stopped to save my life”. Due to his mother’s reluctance to accept his gifts, George Eastman could never do enough for his mother during her lifetime. He opened the Eastman Theater in Rochester on September 4, 1922, which included a chamber-music hall dedicated to his mother’s memory: the Kilbourn Theater. At the Eastman House, he maintained a rose bush using a cutting from her childhood home.[5]

Eastman was associated with the Kodak company in an administrative and an executive capacity until his death; he contributed much to the development of its notable research facilities. In 1911, he founded the Eastman Trust and Savings Bank. While discouraging the formation of unions at his manufacturing plant, he established paternal systems of support for his employees.

He was one of the outstanding philanthropists of his time, donating more than $100 million to various projects in Rochester; Cambridge, Massachusetts; at two historically black colleges in the South; and in several European cities.[7] In 1918, he endowed the establishment of the Eastman School of Music at the University of Rochester, and in 1921 a school of medicine and dentistry there.

In 1925, Eastman gave up his daily management of Kodak to become treasurer. He concentrated on philanthropic activities, to which he had already donated substantial sums. For example, he donated funds to establish theEastman Dental Dispensary in 1916. He was one of the major philanthropists of his time, ranking only slightly behind Andrew Carnegie, John D. Rockefeller, and a few others, but did not seek publicity for his activities. He concentrated on institution-building and causes that could help people’s health. From 1926 until his death, Eastman also donated $22,050 per year to the American Eugenics Society, a popular cause among many of the upper class when there were concerns about immigration and “race mixing.”[10]

Eastman donated £200,000 in 1926 to fund a dental clinic in London, UK after being approached by the Chairman of the Royal Free Hospital, Lord Riddell. This was in addition to donations of £50,000 each from Lord Riddell and the Royal Free honorary treasurer. On 20 November 1931, the Eastman Dental Clinic opened in a ceremony attended by Neville Chamberlain, then Minister of Health, and the American Ambassador to the UK. The clinic was incorporated into the Royal Free Hospital and was committed to providing dental care for disadvantaged children from central London.[11] 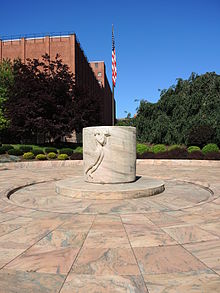 Memorial at Kodak Park in Rochester. Eastman’s ashes lie beneath the Georgia marblemonument.

In his final two years, Eastman was in intense pain caused by a disorder affecting his spine. He had trouble standing, and his walk became a slow shuffle. Today, it might be diagnosed as a form of degenerative disease such as disc herniations from trauma or age causing either painful nerve root compressions, or perhaps a type of lumbar spinal stenosis, a narrowing of the spinal canal caused by calcification in the vertebrae. Since his mother suffered the final two years of her life in a wheelchair,[5] she also may have had a spine condition but that is uncertain. Only her uterine cancer and successful surgery is documented in her health history.[12] If she did have a musculoskeletal disorder, perhaps George Eastman’s spine condition may have been due to a congenital disease, such as ankylosing spondylitis, degenerative disc disease, or a variant of Ehlers–Danlos collagen disorder—conditions known to be inheritable but usually presenting earlier in age. Eastman grew increasingly depressed due to his pain, reduced ability to function, and also since he had witnessed his mother’s suffering from pain. On March 14, 1932, Eastman committed suicide with a single gunshot through the heart, leaving a note which read, “To my friends, my work is done – Why wait? GE.”[2]

His funeral was held at St. Paul’s Episcopal Church in Rochester; he was buried on the grounds of the company he founded at Kodak Park in Rochester.

Eastman had a very astute business sense. He focused his company on making film when competition heated up in the camera industry. By providing quality and affordable film to every camera manufacturer, Kodak managed to turn its competitors into de facto business partners.

During his lifetime Eastman donated $100 million to various organizations, with most of his money going to the University of Rochester and to the Massachusetts Institute of Technology to build their programs and facilities (under the alias “Mr. Smith”).[13][14] The Rochester Institute of Technology has a building dedicated to Eastman, in recognition of his support and substantial donations. MIT installed a plaque of Eastman on one of the buildings he funded. (Students rub the nose of Eastman’s image on the plaque for good luck.) Eastman also made substantial gifts to the Tuskegee Institute and the Hampton Institute in Alabama and Virginia, respectively.

Upon his death, his entire estate went to the University of Rochester. The Eastman Quadrangle of the River Campus was named for him.

Eastman had built a mansion, which became known as the George Eastman House, at 900 East Avenue in Rochester. Here he entertained friends to dinner and held private music concerts. The University of Rochester used the mansion for various purposes for decades after his death. In 1949, it re-opened after having been adapted for use as the George Eastman House International Museum of Photography and Film in 1949. It has been designated a National Historic Landmark.

In 1915, Eastman founded a bureau of municipal research in Rochester “to get things done for the community” and to serve as an “independent, non-partisan agency for keeping citizens informed.” Called the Center for Governmental Research, the agency continues to carry out that mission.[15]

This profile is partly adapted from a Wikipedia entry on George Eastman, available under the Creative Commons Attribution-ShareAlike License.