“You can’t do it unless you can imagine it.”

George Walton Lucas, Jr.[2] (born May 14, 1944) is an American filmmaker and entrepreneur. He is best known as the creator of the Star Wars and Indiana Jones franchises, as well as the founder of Lucasfilm and ILM. He led Lucasfilm as chairman and chief executive before selling it to The Walt Disney Company in 2012.[3]

Upon graduating from the University of Southern California in 1967, Lucas co-founded American Zoetrope with fellow filmmaker Francis Ford Coppola. He wrote and directed THX 1138 (1971), based on his earlier student short Electronic Labyrinth: THX 1138 4EB, which was a critical success but a financial failure. Lucas’s next work as a writer-director was the film American Graffiti (1973), inspired by his teen years in early 1960s Modesto, California, and produced through the newly founded Lucasfilm. The film was critically and commercially successful, and received five Academy Award nominations including Best Picture.

Lucas’s next film, an epic space opera titled Star Wars (1977), went through a troubled production process, but was a surprise hit, becoming the highest-grossing film at the time as well as a winner of six Academy Awards and a cultural phenomenon. Following the first Star Wars film, Lucas only produced and co-wrote the following installments in the trilogy, The Empire Strikes Back (1980) and Return of the Jedi (1983). Along with Steven Spielberg, he co-created and wrote the Indiana Jones films Raiders of the Lost Ark (1981), Temple of Doom (1984), and The Last Crusade (1989). Lucas also produced a variety of films through Lucasfilm in the 1980s and 1990s.

In 1997, Lucas re-released the original Star Wars trilogy as part of a Special Edition, where he notably made several alterations to the films. These were followed by further changes for home media releases in 2004 and 2011. In 1999, Lucas returned to directing with the Star Wars prequel trilogy, consisting of The Phantom Menace (1999), Attack of the Clones (2002), and Revenge of the Sith (2005). He later wrote the Indiana Jonessequel Kingdom of the Crystal Skull (2008), and served as the story-writer and executive producer for the war film Red Tails (2012).

Lucas is one of the American film industry’s most financially successful filmmakers, and has been personally nominated for four Academy Awards. He is also considered a significant figure in the New Hollywood era. Despite this, he has been criticized by fans and critics alike in recent years, due to the changes made to the Star Wars original trilogy as well as the perceived inferior quality of the Star Wars prequel trilogy and Kingdom of the Crystal Skull when compared to their predecessors.

Lucas was born and raised in Modesto, California, the son of Dorothy Ellinore Lucas (née Bomberger; 1913–1989) and George Walton Lucas, Sr. (1913–1991), who owned a stationery store.[4][5] He is of German, Swiss-German, English, Scottish, and distant Dutchand French descent.[6] Growing up, Lucas had a passion for cars and motor racing, which eventually serve as inspiration for his films 1:42.08 and American Graffiti. Long before Lucas became obsessed with film making, he wanted to be a race-car driver, and he spent most of his high school years racing on the underground circuit at fairgrounds and hanging out at garages. On June 12, 1962, while driving his souped-up Autobianchi Bianchina, another driver broadsided him, flipping over his car, nearly killing him, causing him to lose interest in racing as a career.[7][8] He attended Modesto Junior College, where he studied anthropology, sociology, and literature, amongst other subjects.[7] He also began filming with an 8 mm camera, including filming car races.[7]

Lucas then transferred to the University of Southern California School of Cinematic Arts. USC was one of the earliest universities to have a school devoted to motion picture film. During the years at USC, Lucas shared a dorm room with Randal Kleiser. Along with classmates such as Walter Murch, Hal Barwood and John Milius, they became a clique of film students known as The Dirty Dozen. He also became good friends with fellow acclaimed student filmmaker and future Indiana Jones collaborator, Steven Spielberg. Lucas was deeply influenced by the Filmic Expression course taught at the school by filmmaker Lester Novros which concentrated on the non-narrative elements of Film Form like color, light, movement, space, and time. Another inspiration was the Serbian montagist (and dean of the USC Film Department) Slavko Vorkapich, a film theoretician who made stunning montage sequences for Hollywood studio features at MGM, RKO, and Paramount. Vorkapich taught the autonomous nature of the cinematic art form, emphasizing the unique dynamic quality of movement and kinetic energy inherent in motion pictures.

Lucas saw many inspiring films in class, particularly the visual films coming out of the National Film Board of Canada like Arthur Lipsett‘s 21-87, the French-Canadian cameraman Jean-Claude Labrecque‘s cinéma vérité 60 Cycles, the work of Norman McLaren, and the documentaries of Claude Jutra. Lucas fell madly in love with pure cinema and quickly became prolific at making 16 mm nonstory noncharacter visual tone poems and cinéma vérité with such titles as Look at Life, Herbie, 1:42.08, The Emperor, Anyone Lived in a Pretty (how) Town, Filmmaker, and 6-18-67. He was passionate and interested in camerawork and editing, defining himself as a filmmaker as opposed to being a director, and he loved making abstract visual films that created emotions purely through cinema.[9]

After graduating with a bachelor of fine arts in film in 1967, he tried joining the United States Air Force as an officer, but he was immediately turned down because of his numerous speeding tickets. He was later drafted by the Army for military service in Vietnam, but he was exempted from service after medical tests showed he had diabetes, the disease that killed his paternal grandfather.

In 1967, Lucas re-enrolled as a USC graduate student in film production.[10] Working as a teaching instructor for a class of U.S. Navy students who were being taught documentary cinematography, Lucas directed the short film Electronic Labyrinth: THX 1138 4EB, which won first prize at the 1967–68 National Student film festival, and was later adapted into his first full-length feature film, THX 1138. Lucas was awarded a student scholarship by Warner Bros. to observe and work on the making of a film of his choosing. The film he chose was Finian’s Rainbow (1968) which was being directed by Francis Ford Coppola, who was revered among film school students of the time as a cinema graduate who had “made it” in Hollywood. In 1969, Lucas was one of the camera operators on the classic Rolling Stones concert film Gimme Shelter.

Lucas co-founded the studio American Zoetrope with Coppola—whom he met during his internship at Warner Bros.—hoping to create a liberating environment for filmmakers to direct outside the perceived oppressive control of the Hollywood studio system.[11] His first full-length feature film produced by the studio, THX 1138, was not a success. Lucas then created his own company, Lucasfilm, Ltd., and directed American Graffiti (1973).

Lucas’s new-found wealth and reputation enabled him to develop a story set in space. Even so, he encountered difficulties getting Star Wars made. It was only because Alan Ladd, Jr., at 20th Century Fox liked American Graffiti that he forced through a production and distribution deal for the film, which ended up restoring Fox to financial stability after a number of flops.[12]

Star Wars quickly became the highest-grossing film of all-time, displaced five years later by Spielberg’s E.T. the Extra-Terrestrial. After the success of American Graffiti and prior to the beginning of filming on Star Wars, Lucas was encouraged to renegotiate for a higher fee for writing and directing Star Wars than the $150,000 agreed.[7] He declined to do so, instead negotiating for advantage in some of the as-yet-unspecified parts of his contract with Fox, in particular ownership of licensing and merchandising rights (fornovelizations, T-shirts, toys, etc.) and contractual arrangements for sequels.[7] The studio was unconcerned to relinquish these rights, as its last major attempt in the field, with the 1967 film, Doctor Dolittle, had proved a discouraging failure.[13] Lucas exploited merchandising rights wisely, and Lucasfilm has earned hundreds of millions of dollars from licensed games, toys, and collectibles created for the franchise.[7] 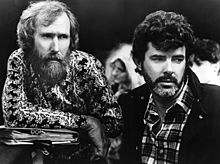 Over the two decades after the first Star Wars film, Lucas worked extensively as a writer and/or producer, including the many Star Wars spinoffs made for film, TV, and other media. Lucas acted as executive producer for the next two Star Wars films, commissioning Irvin Kershner to direct The Empire Strikes Back, and Richard Marquand to direct Return of the Jedi, while receiving a story credit on the former and sharing a screenwriting credit withLawrence Kasdan on the latter.[14] He also acted as executive producer and story writer on all four of the Indiana Jones films, which he convinced his colleague and good friend, Steven Spielberg, to direct.

Other successful projects where Lucas acted as a producer or executive producer in this period include Kurosawa’s Kagemusha (1980), Lawrence Kasdan’s Body Heat (1981), Jim Henson‘s Labyrinth (1986), Godfrey Reggio‘sPowaqqatsi (1986) and the animated film The Land Before Time (1988). There were less successful projects, however, including More American Graffiti (1979), the ill-fated Howard the Duck (1986), which was the biggest flop of his career; Willow (1988, which Lucas also wrote); and Coppola’s Tucker: The Man and His Dream (1988).

From 1992 to 1996, Lucas served as executive producer for the indiana Jones television spinoff The Young Indiana Jones Chronicles. In 1997, as part of the 20th anniversary of Star Wars, Lucas returned to the original trilogy and made numerous modifications using newly available digital technology, releasing them in theaters as the Star Wars Special Edition. For DVD releases in 2004 and Blu-ray releases in 2011, the trilogy received further revisions to make them congruent with the prequel trilogy. Besides the additions to the Star Wars franchise, Lucas released a Director’s Cut of THX 1138 in 2004, with the film re-cut and containing a number of CGI revisions.

The animation studio Pixar was founded as the Graphix Group, one third of the Computer Division of Lucasfilm.[15] Pixar’s early computer graphics research resulted in groundbreaking effects in films such as Star Trek II: The Wrath of Khan[16] and Young Sherlock Holmes,[16] and the group was purchased in 1986 by Steve Jobs shortly after he left Apple Computer. Jobs paid Lucas US$5 million and put US$5 million as capital into the company. The sale reflected Lucas’ desire to stop the cash flow losses from his 7-year research projects associated with new entertainment technology tools, as well as his company’s new focus on creating entertainment products rather than tools. A contributing factor was cash-flow difficulties following Lucas’ 1983 divorce concurrent with the sudden dropoff in revenues from Star Wars licenses following the release of Return of the Jedi.

The sound equipped system, THX Ltd, was founded by Lucas and Tomlinson Holman.[17] The company was formerly owned by Lucasfilm, and contains equipment for stereo, digital, and theatrical sound for films, and music. Skywalker Sound and Industrial Light & Magic, are the sound and visual effects subdivisions of Lucasfilm, while Lucasfilm Games, later renamed LucasArts, produces products for the gaming industry.

This profile is partly adapted from a Wikipedia entry on George Lucas, available under the Creative Commons Attribution-ShareAlike License.