“There’s only one way to succeed in this business. Step on those guys. Gouge their eyes out. Trample on them. Kick them in the balls. You’ll be a smash.”

Louis Burt Mayer (/ˈmeɪ.ər/; born Lazar Meir; July 12, 1884[1] – October 29, 1957) (Russian: Лазарь Меир) was an American film producer and co-founder of Metro-Goldwyn-Mayer studios (MGM) in 1924. Mayer was skilled at developing star actors, including child actors, then placing them in consistently slick productions, such as musicals or comedies, for which MGM became famous. Under Mayer’s management, MGM accumulated the largest concentration of leading writers, directors and stars in Hollywood.

Growing up poor and quitting school at 12 to support his family, he later moved to Boston and purchased a small vaudeville theater. After expanding and moving to Los Angeles, he teamed up with Irving Thalberg, and they developed hundreds of high quality story-based films, noted for their wholesome and lush entertainment. Mayer liked his stars to portray an idealized vision of men and women, family life, virtue, and patriotism, all presented in the present world they lived in. He believed that movies should not be a reflection of life, but be an entertaining escape from life. Mayer handled the business part of running the studio, such as setting budgets and approving new productions, while Thalberg, still in his twenties, ran all MGM productions.

During his reign at MGM, after Thalberg’s early death in 1936, he had enemies as well as admirers. Some stars did not appreciate his control over their lives, while others saw him as a father figure, important in their lives. Joan Crawford said “Mayer was my father, my father confessor, the best friend I ever had,” while Ricardo Montalban recalled that “he really thought of the people under contract as his boys and girls.” Nevertheless, he believed in wholesome entertainment and went to great lengths so that MGM had “more stars than there are in the heavens”.[2]

He was forced to resign MGM as its vice president in 1951, when the studio’s parent company, Loew’s, Inc., wanted to improve MGM’s declining profits. Mayer was a staunch conservative, at one time the chairman ofCalifornia’s Republican party. In 1927 he was one of the founders of AMPAS, famous for its annual Academy Awards.[3] Biographer Scott Eyman states that Mayer’s “supreme gift was his understanding of the nature of stardom and the needs of the audience, bred by his years of being an exhibitor. . . Mayer’s view of America became America’s view of itself.”

His father started a scrap metal business, J. Mayer & Son. An immigrant unskilled in any trade, he struggled to earn a living. Young Louis quit school at age twelve to work with his father and help support his family.[8] He roamed the streets with a cart that said “Junk Dealer,” and collected any scrap metal he came across. When the owner of a tin business, John Wilson, saw him with his cart, he began giving him copper trimmings which were of no use. “Mr Wilson was my best friend,” Mayer would later say, “my first partner.” Wilson remembered that he was impressed with the boy’s good manners and bright personality.[9] Whenever he visited Saint John in later years, he placed flowers on Wilson’s grave, just as he did on his mother’s.[9]

“It was a crappy childhood,” said Mayer’s nephew Gerald. “They were poor. My grandfather barely spoke English, and he hadn’t been trained to do anything at all.” It was Louis’s ambition and drive that supported the family.[10] With his family speaking mostly Yiddish at home, it made his goal of self-education when he quit school more difficult.[10]

In his spare time, he hung around the York theatre, sometimes paying to watch the live vaudeville shows. “All he wants to do is hang around that new Opera House every chance he gets,” said his father. He became enamoured of the entertainment business. ActressAnn Rutherford, also from Canada, would later reflect on Mayer’s childhood and the studio he built: “I had been to his hometown. I knew from whence he sprang. He taught himself grammar. He taught himself manners. If anybody on earth ever created himself, Louis B. Mayer did.” [11]

In 1904, the 19-year-old Mayer left Saint John for Boston, where he continued for a time in the scrap metal business, married, and took a variety of odd jobs to support his family when his junk business lagged.

Mayer renovated the Gem Theater, a rundown, 600 seat burlesque house in Haverhill, Massachusetts,[12] which he reopened on November 28, 1907 as the Orpheum, his first movie theater. To overcome an unfavorable reputation that the building had, Mayer opened with a religious film at his new Orpheum, From the Manger to the Cross, in 1912.[13][14] Within a few years, he owned all five of Haverhill’s theaters, and, with Nathan H. Gordon, created the Gordon-Mayer partnership that controlled the largest theater chain in New England.[15]

In 1914, the partners organized their own film distribution agency in Boston. Mayer paid D.W. Griffith $25,000 for the exclusive rights to show The Birth of a Nation (1915) in New England. Although Mayer made the bid on a film that one of his scouts had seen, but he had not, his decision netted him over $100,000.[16] Mayer partnered with Richard A. Rowland in 1916 to create Metro Pictures Corporation, a talent booking agency, in New York City.

Two years later, Mayer moved to Los Angeles and formed his own production company, Louis B. Mayer Pictures Corporation. The first production was 1918’s Virtuous Wives.[17] A partnership was set up with B. P. Schulberg to make the Mayer-Schulberg Studio. Mayer’s big breakthrough, however, was in April 1924 when Marcus Loew, owner of the Loew’s chain, merged Metro Pictures, Samuel Goldwyn‘s Goldwyn Pictures Corporation, and Mayer Pictures into Metro-Goldwyn. Loew had bought Metro and Goldwyn some months before, but could not find anyone to oversee his new holdings on the West Coast. Mayer, with his proven success as a producer, was an obvious choice. He was named head of studio operations and a Loew’s vice president, based in Los Angeles, reporting to Loew’s longtime right-hand man Nicholas Schenck. He would hold this post for the next 27 years. Before the year was out, Mayer added his name to the studio with Loew’s blessing, renaming it Metro-Goldwyn-Mayer.

Loew died in 1927, and Schenck became president of Loew’s. Mayer and Schenck hated each other intensely; Mayer reportedly referred to his boss, whose name was pronounced “Skenk,” as “Mr. Skunk” in private.[18] Two years later, Schenck agreed to sell Loew’s – and MGM – to William Fox, which angered Mayer. But despite his important role in MGM, Mayer was not a shareholder, and had no standing to challenge the sale. So he instead used his Washington connections to persuade the Justice Department to delay the merger on antitrust grounds. During the summer of 1929, Fox was severely injured in an auto accident. By the time he recovered, the stock market crash had wiped out his fortune, destroying any chance of the deal going through even if the Justice Department had lifted its objections. Nonetheless, Schenck believed Mayer had cost him a fortune and never forgave him, causing an already frigid relationship to get even worse. 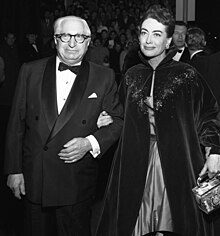 With Joan Crawford at the premiere of Torch Song (1953)

In late 1922, Mayer was introduced to Irving Thalberg, then working for Universal Pictures. Mayer was searching for someone to help him manage his small, but dynamic and fast-growing studio. At that first meeting, Thalberg “made a deep, immediate impression on Mayer,” writes biographer Roland Flamini. Later that evening, after Thalberg had left, Mayer said to studio attorney Edwin Loeb: “Tell him if he comes to work for me, I’ll look after him as though he were my son.”[19]:46

Although their personalities were in many ways opposite, Mayer being more outspoken and nearly twice the younger man’s age, Thalberg was hired as vice president in charge of production at Louis B. Mayer Productions. Years later, Mayer’s daughter, Irene Mayer Selznick, recalled that “it was hard to believe anyone that boyish could be so important.”[19]:47 According to Flamini, Thalberg was hired because, although Mayer was an astute businessman, “what he lacked was Thalberg’s almost unerring ability to combine quality with commercial success, to bring artistic aspiration in line with the demands of the box office.”[19]:47

Mayer’s company subsequently merged with two others to become Metro-Goldwyn-Mayer (MGM), with the 24-year-old Thalberg made part-owner and accorded the same position as vice president in charge of production. Three years after the merger, MGM became the most successful studio in Hollywood.

This profile is partly adapted from a Wikipedia entry on Louis B. Mayer, available under the Creative Commons Attribution-ShareAlike License.