Sarah Breedlove (December 23, 1867 – May 25, 1919), known as Madam C. J. Walker, was an African American entrepreneur, philanthropist, and the first female self-made millionaire in America.[1][2] She made her fortune by developing and marketing a line of beauty and hair products for black women under the company she founded, Madame C.J. Walker Manufacturing Company.

Sarah Breedlove was born on December 23, 1867 in Delta, Louisiana.[3] She was one of six children; she had a sister, Louvenia, and four brothers: Alexander, James, Solomon, and Owen Jr. Her parents and elder siblings were enslaved people on Madison Parish plantation, owned by Robert W. Burney. She was the first child in her family born into freedom after the Emancipation Proclamation was signed. Her mother died, possibly from cholera, in 1872. Her father remarried and died shortly afterward. Sarah, orphaned at the age of seven, moved in with her older sister Louvenia and brother inlaw Willie Powell. At the age of 14, she married Moses McWilliams to escape Powell’s mistreatment, and three years later her daughter, Lelia McWilliams, was born.[4] When Sarah was 20, her husband died, and Lelia was just 2 years old. Shortly afterward she moved to St. Louis, where three of her brothers lived. They were all barbers at a local barbershop. She managed to get a job as a washer woman. She barely earned more than a dollar a day but was determined to make enough money so that her daughter would be able to receive a formal education.[5]

Sarah experienced severe dandruff and other scalp ailments. She developed baldness due to these skin disorders and the application of harsh products like lye that were included in soaps used to cleanse the hair.[6][7]Because most Americans lacked indoor plumbing, central heating and electricity, they bathed and washed their hair infrequently. Initially she learned about hair care from her brothers, who owned a barber shop in St. Louis.[6]

Madame C.J. Walker’s Wonderful Hair Grower in the permanent collection of The Children’s Museum of Indianapolis.[8]

Around the time of the 1904 World’s Fair, she became a commission agent selling products for Annie Turnbo Malone, an African American hair care entrepreneur. While working with Annie Malone, she adapted her knowledge of hair and hair products. She moved to Denver to work on her hair care products, and married Charles Joseph Walker, a newspaper advertising salesman. She emerged with the name Madam C. J. Walker, an independent hairdresser and retailer of cosmetic creams. After their marriage Charles Walker provided advice on advertising and promotion, while Madam C. J. Walker trained women to become “beauty culturists” and to learn the art of selling. In 1906, Madam Walker put her daughter A’Lelia (née McWilliams) in charge of the mail order operation while she and her husband traveled throughout the southern and eastern United States to expand the business.[5][6][7]

While her daughter Lelia (later known as A’Lelia Walker) ran the mail order business from Denver, Madam Walker and her husband traveled throughout the southern and eastern states. They settled in Pittsburgh in 1908 and opened Lelia College to train “hair culturists.” In 1910 Walker moved to Indianapolis where she established her headquarters and built a factory, hair salon, and beauty school to train her sales agents. She later added a laboratory to help with research.[7] Sarah, now known as Madam C. J. Walker, was becoming very successful. Her business market expanded beyond the United States to Cuba, Jamaica, Haiti, Panama, and Costa Rica.[5][6]

Inspired by the model of the National Association of Colored Women, she began to organize her sales agents into local and state clubs. In 1917 she convened her first annual conference of the Madam Walker Beauty Culturists in Philadelphia. During the convention she gave prizes not only to the women who had sold the most products and brought in the most new sales agents, but also to those who had contributed the most to charity in their communities. She stressed the importance of philanthropy and political engagement.[6] This had a huge impact on expanding her business. She also started her own mail order business to keep up with the booming business, placing her daughter A’Lelia Walker in charge of it.[7][9]

She began to teach and train other black women in women’s independence, budgeting, and grooming in order to help them build their own businesses. She also gave lectures on political, economic and social issues at conventions sponsored by powerful black institutions. In 1917 she began organizing the Walker Hair Culturists Union of America. Its first convention in the summer of 1917 was one of the first national meetings of American women brought together to discuss business and commerce. She became involved in political matters, joining the executive committee of New York chapter of the NAACP, which organized the Silent Protest Parade. It was a public demonstration of more than 8,000 African Americans to protest a riot that killed 39 African Americans.[5] 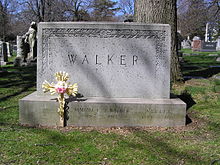 In 1917, she commissioned Vertner Tandy, the first licensed black architect in New York State and a founding member of Alpha Phi Alpha fraternity, to design a house for her in Irvington-on-Hudson, New York, Villa Lewaro.[10]The house cost $250,000 to build.[10] She moved into Villa Lewaro in May 1918 and hosted an opening event to honor Emmett Scott, then the Assistant Secretary for Negro Affairs of the United States War Department.[6]

Just before her death she pledged $5,000, the equivalent of about $65,000 in 2012, to the NAACP’s anti-lynching fund. Madam C. J. Walker died at Villa Lewaro on Sunday, May 25, 1919,[4][10] from complications ofhypertension. She was 51. In her will she directed two-thirds of future net profits of her estate to charity; she bequeathed nearly $100,000 to orphanages, institutions, and individuals.[1][5] At her death she was considered to be the wealthiest African American woman in America. According to Walker’s New York Times obituary, “she said herself two years ago [in 1917] that she was not yet a millionaire, but hoped to be some time.”[10] Her daughter,A’Lelia Walker, became the president of the Madame C.J. Walker Manufacturing Company.[6]

Madam Walker’s System included a shampoo, a pomade stated to help hair grow, strenuous brushing and applying iron combs to hair. This method claimed to transform lusterless and brittle hair into soft luxurious hair. The manufacturing company employed women who, dressed in a characteristic uniform of white shirts and black skirts, and carrying black satchels, made house calls widely around the United States and in the Caribbean. The pomade and other products were packaged in tin containers carrying a picture of Madame Walker, which, accompanied by heavy advertising, made Madame Walker well known in the US and more widely in the 1920s. Similar products came to be produced in Europe and by other companies in the United States, including those set up by Mrs. Annie M. Turnbo Malone (“Poro System”) and Madame Sarah Spencer Washington (“Apex System”.) [11]

Madam Walker’s legacy remains through National Historic Landmarks, one of which is Villa Lewaro located in Irvington, New York. Villa Lewaro was auctioned off and eventually sold to a fraternal organization called the Companions of the Forest in America in 1932. After being privately owned in 1979 Villa Lewaro was listed on the National Register of Historic Places.[12] Other properties Walker owned was the Walker Manufacturing Company Building located in Indianapolis. The building previously contained a restaurant, barbershop, drugstore, and the Walker factory. The building was renamed The Madame Walker Theater Center and now is on the National Register of Historic Places.[13]

Various scholarships and awards have been named after Madam Walker one of which is the Madam C.J Walker Business and Community Recognition Awards held by the National Coalition of 100 Black Women, Oakland Bay Area chapter. The annual awards luncheon honors Walker and follows in her footsteps honoring outstanding women in the community with scholarships.[14] The Madame Walker Theatre Center also honors leaders in entrepreneurship to pay tribute to Madam Walker. The awards that are presented to individuals are The Madame C.J Walker heritage award as well as young entrepreneur and legacy awards which embody what Madam Walker represented.[15]

This profile is partly adapted from a Wikipedia entry on Madam CJ Walker, available under the Creative Commons Attribution-ShareAlike License.