“If you can get over this initial distrust that people have of strangers, you can do remarkable things.”

Pierre Morad Omidyar (Persian: پیر مراد امیدیار‎‎, born June 21, 1967) is a French-born Iranian-American entrepreneur and philanthropist. He is the founder of the eBay auction site, and served as Chairman from 1998 to 2015.[3] He became a billionaire at the age of 31 with eBay’s 1998 Initial Public Offering (IPO).[2] Omidyar and his wife Pamela are well-known philanthropists who founded Omidyar Network in 2004 in order to expand their efforts beyond nonprofits to include for-profits and public policy.

Since 2010, Omidyar has been involved in online journalism as the head of investigative reporting and public affairs news service Honolulu Civil Beat.[4] In 2013, he announced that he would create and finance First Look Media, a journalism venture to include Glenn Greenwald, Laura Poitras, and Jeremy Scahill.[5][6][7]

Omidyar was born in Paris, the son of Iranian immigrant parents who had been sent to France by their parents to attend university.[8] His mother, Elahé Mir-Djalali Omidyar (Persian: الهه میرجلالی امیدیار‎‎), who did her doctorate in linguistics at the Sorbonne, is a well-known academic.[9] His father was a surgeon.[10] The family moved to the U.S. when Omidyar was a child.

His interest in computers began while he was a ninth-grade student at The Potomac School in McLean, Virginia. He graduated from St. Andrew’s Episcopal School in Potomac, Maryland, in 1984. He graduated from Tufts University in Medford/Somerville,Massachusetts, with a bachelor’s degree in computer science in 1988. Shortly after, he went to work for Claris, an Apple Computer subsidiary, where he worked on the team that upgraded MacDraw to MacDraw II. In 1991, he co-founded Ink Development, a pen-based computing startup that later was rebranded as an e-commerce company and renamed eShop. 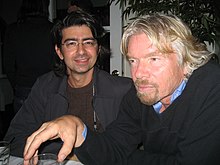 In 1995, at the age of 28, Omidyar began to write the original computer code for an online venue to enable the listing of a direct person-to-person auction for collectible items. He created a simple prototype on his personal web page, and on Labor Day, Monday, September 4, 1995, he launched an online service called, Auction Web, which would eventually become the auction site eBay.[11] In May 2003, eBay was successfully sued by Thomas Woolston for patent infringement of online auction software Woolston had invented in the late 1990s.[12] The service was hosted on a website Omidyar had originally created for information on the Ebola virus.[13][14] The first item sold on the site was a broken laser pointer. Omidyar was astonished that anyone would pay for the device in its broken state, but the buyer assured him that he was deliberately collecting broken laser pointers. Similar surprises followed. The business exploded as correspondents began to register trade goods of an unimaginable variety.

Omidyar incorporated the enterprise; the small fee he collected on each sale financed the expansion of the site. The revenue soon outstripped his salary at General Magic and nine months later, Omidyar decided to dedicate his full attention to his new enterprise.

In 1997, Pierre Omidyar changed the company’s name to eBay and began to advertise the service aggressively. The word “eBay” was made up on the fly by Omidyar when he was told that his first choice for his web site, “echobay”, had already been registered. Not wanting to make a second trip to Sacramento, he came up with “eBay”. The frequently repeated story that eBay was founded to help Omidyar’s fiancée trade Pez candy dispensers was fabricated by a public relations manager in 1997 to interest the media. This was revealed in Adam Cohen’s 2002 book,[15] and confirmed by eBay.

Jeffrey Skoll joined the company in 1996. In March 1998, Meg Whitman was brought in as president and CEO, and continued to run the company until January 2008, when she announced her retirement. In September 1998, eBay launched a successful public offering, making both Omidyar and Skoll billionaires. As of July 2008, Omidyar’s 178 million eBay shares were worth around $4.45 billion.[16] Omidyar is also an investor of Montage Resort and Spa in Laguna Beach, California.

In 2013, prompted by the Edward Snowden leaks,[18] Omidyar announced the creation of First Look Media, a journalism venture launched on February 10, 2014 with The Intercept and including such journalists as Glenn Greenwald, Laura Poitras, Jeremy Scahill,Dan Froomkin, John Temple, and Jay Rosen.[6][19]

This profile is partly adapted from a Wikipedia entry on Pierre Omidyar, available under the Creative Commons Attribution-ShareAlike License.