Ralph Lauren (born Ralph Lifshitz; October 14, 1939) is an American fashion designer, philanthropist, and business executive, best known for the Ralph Lauren Corporation clothing company, a global multi-billion-dollar enterprise. He has also become well known for his collection of rare automobiles, some of which have been displayed in museum exhibits. On September 29, 2015, it was announced that Mr. Lauren would be stepping down as C.E.O. of the company that he founded, but intended to remain active at the company in the new roles of executive chairman and chief creative officer.

In 2010, Lauren was declared Chevalier de la Legion d’honneur by French President Nicolas Sarkozy. As of January 2015, Forbes estimates his wealth at $8 billion, which makes Ralph Lauren the 155th richest person in the world.[1]

Lauren attended day school followed by MTA (now known as the Marsha Stern Talmudical Academy), before eventually graduating from DeWitt Clinton High School in 1957.[5][6] He has said he had had heroes such asJohn F. Kennedy and James Stewart, hoping to acquire a “movie star” type of personality.[7] In MTA Lauren was known by his classmates for selling ties to his fellow students. In a later interview about his early ambitions he referred to[8] his Clinton yearbook, in which it stated under his picture that he wanted to be a millionaire.[9] There has been a lot of debate over the correct pronunciation of the designers name, however his niece Jenny Lauren clarifies this issue on her website. She states that Lauren is pronounced as the girls first name [laur-un] and not the same as Italian actress Sophia Loren [lo-wren].

He went to Baruch College where he studied business, although he dropped out after two years.[citation needed] From 1962 to 1964 he served in the United States Army and left to work briefly for Brooks Brothers as a sales assistant before leaving to become a salesman for a tie company. In 1966, when he was 26, he was inspired to design a wide, European-style necktie he had seen Douglas Fairbanks Jr wearing, but the idea was rejected by the company he worked for as not being commercially viable. He left to establish his own company working out of a drawer in the Empire State Building, taking rags and turning them into ties. He sold the ties to small shops in New York, with a major turning point when he was approached by Neiman Marcus, who bought 1,200.[10]

In 1967, with the financial backing of Manhattan clothing manufacturer Norman Hilton, Lauren opened a necktie store where he also sold ties of his own design, under the label “Polo.”[11] He later received the rights to use the trademark Polo from Brooks Brothers; however, Brooks Brothers managed to retain its rights to the iconic “original polo button-down collar” shirt (still produced today), in spite of Lauren’s Polo trademark. In 1971, he expanded his line and opened a Polo boutique on Rodeo Drive in Beverly Hills.[12] 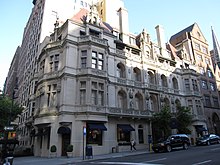 In 1970, Ralph Lauren won the COTY Award for his menswear line. Around that same time he released a line of women’s suits that were tailored in a classic men’s style. This was the first time the Polo emblem was seen, displayed on the cuff of the suit. Ralph Lauren released Polo’s famous short sleeve pique shirt with the Polo logo in 1972 and unveiled his first Ralph Lauren collection for women.[13] It came out in 24 colors and soon became a classic.[14] He also gained recognition for his design after he was contracted to provide clothing styles for the movie The Great Gatsby[15] as well as for Diane Keaton‘s title character in the 1977 film, Annie Hall.[16] 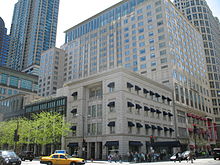 A Polo Ralph Lauren store on theMagnificent Mile in Chicago

In 1984, he transformed the Rhinelander Mansion, former home of the photographer Edgar de Evia and Robert Denning, into the flagship store for Polo Ralph Lauren. This same year de Evia photographed the cover feature story for House & Garden on the Lauren home Round Hill in Jamaica,[17] which had formerly been the home of Babe and Bill Paley.[18] On June 11, 1997, Ralph Lauren Corporation became a public company, traded on the New York Stock Exchange under the symbol RL.

On September 29, 2015, Ralph Lauren announced that he would be stepping down as Chief Executive, to be replaced by Stefan Larsson, the President of Gap’s Old Navy chain.[19]

Lauren co-founded the Nina Hyde Center for Breast Cancer Research at Georgetown University in 1989 and was a driving force behind the annual Fashion Targets Breast Cancer campaign which launched in 1994. In 2001, the Ralph Lauren Corporation launched the Polo Ralph Lauren Foundation to support various charitable initiatives around the world, including the New York-based Ralph Lauren Center for Cancer Care and Prevention. Lauren also launched the “Pink Pony Fund”, a worldwide initiative in the fight against cancer.[30] In 2014, Lauren partnered with The Royal Marsden NHS Foundation Trust to fund a new, state-of-the-art breast cancer research facility.[29][31]

This profile is partly adapted from a Wikipedia entry on Ralph Lauren, available under the Creative Commons Attribution-ShareAlike License.