“The thing I would most like to see invented is a way of teaching children and grown-ups the difference between right and wrong.”

Ian Robert Maxwell, MC (10 June 1923 – 5 November 1991) was a Czechoslovakian-born British media proprietor and Member of Parliament (MP). He rose from poverty to build an extensive publishing empire. After Maxwell’s death, huge discrepancies in his companies’ finances were revealed, including his fraudulent misappropriation of the Mirror Group pension fund.

Early in his life, he escaped from Nazi occupation, joining the Czechoslovak Army in exile in the Second World War and was decorated after active service in the British Army. In subsequent years he worked in publishing, building up Pergamon Press to a major publishing house. After six years as an MP during the 1960s, he again put all his energy into business, successively buying the British Printing Corporation, Mirror Group Newspapers and Macmillan, Inc, among other publishing companies.

Maxwell had a flamboyant lifestyle, living in Headington Hill Hall in Oxford from which he often flew in his helicopter, and sailing in his luxury yacht, the Lady Ghislaine. He was notably litigious and often embroiled in controversy, including about his support for Israel at the time of its 1948 Palestine war. In 1989, he had to sell successful businesses, including Pergamon Press, to cover some of his debts. In 1991, his body was discovered floating in the Atlantic Ocean having fallen overboard from his yacht. He was buried in Israel.

Maxwell’s death triggered the collapse of his publishing empire as banks called in loans. His sons briefly struggled to keep the business together, but failed as the news emerged that Maxwell had stolen hundreds of millions of pounds from his own companies’ pension funds. The Maxwell companies applied for bankruptcy protection in 1992.

In July 1984, Maxwell acquired Mirror Group Newspapers from Reed International plc.[23] for £113 million.[24] MGN, now part of Trinity Mirror, published the Daily Mirror, a pro-Labour Party tabloid, and other popular newspapers in England and Scotland. At a press conference to publicise his acquisition, Maxwell said his editors would be “free to produce the news without interference”.[23] Meanwhile, at a meeting of Maxwell’s new employees, Mirror journalist Joe Haines asserted that he was able to prove that their boss “is a crook and a liar”.[25][26] Haines quickly came under Maxwell’s influence and later wrote his authorised biography.[25]

In June 1985, Maxwell announced a takeover of Sir Clive Sinclair’s ailing home computer company, Sinclair Research, through Hollis Brothers, a Pergamon Press subsidiary.[27] The deal was aborted in August 1985.[28] In 1987 Maxwell purchased part of IPC Mediato create Fleetway Publications. That same year he launched the London Daily News in February, after a delay caused by production problems, but the paper closed in July after sustaining significant losses contemporary estimates put at £25 million.[29] At first intended to be a rival to the Evening Standard, Maxwell had made a rash decision for it to be the first 24-hour paper as well.[30]

By 1988, Maxwell’s various companies owned, in addition to the Mirror titles and Pergamon Press, Nimbus Records, Macmillan, Inc (of which Collier books was a part), Maxwell Directories, Prentice Hall Information Services, and the Berlitz language schools. He also owned a half-share of MTV in Europe and other European television interests, Maxwell Cable TV and Maxwell Entertainment.[22] Maxwell had purchased Macmillan, Inc, the American publishing firm, during 1988 for $2.6 billion. In the same year he launched an ambitious new project, a transnational newspaper called The European. In 1991, he was forced to sell Pergamon Press and Maxwell Directories to Elsevier for £440 million to cover his debts;[22] he used some of this money to buy an ailing tabloid, the New York Daily News. Also in 1991, Maxwell sold 49% of the stock of Mirror Group Newspapers to the public.[4]

Maxwell’s links with Eastern European totalitarian regimes resulted in several biographies (generally considered to be hagiographies[31]) of those countries’ then leaders, with interviews conducted by Maxwell, for which he received much derision.[4] At the beginning of an interview with Romania‘s Nicolae Ceaușescu, then the country’s Communist leader, he asked: “How do you account for your enormous popularity with the Rumanian people?”[32] 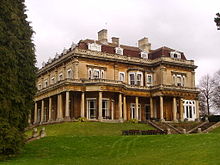 Headington Hill Hall was the home of Robert Maxwell for the last 32 years of his life, which he rented from Oxford City Council and described as “the bestcouncil house” in the country.[33] It is now part of Oxford Brookes University.

Maxwell was also the chairman of Oxford United, saving them from bankruptcy and attempting to merge them with Reading in 1983 to form a club he wished to call “Thames Valley Royals“. He took Oxford into the top flight of English football in 1985, and the team won the League Cup a year later. Maxwell bought into Derby County F.C. in 1987. He also attempted to buy Manchester United in 1984, but refused owner Martin Edwards‘s asking price.

Maxwell was known to be litigious against those who would speak or write against him. The satirical magazine Private Eye lampooned him as “Cap’n Bob” and the “bouncing Czech”,[34] the latter nickname having originally been devised by Prime Minister Harold Wilson[35] (under whom Maxwell was an MP). Maxwell took out several libel actions against Private Eye, one resulting in the magazine losing an estimated £225,000 and Maxwell using his commercial power to hit back with a one-off spoof magazine Not Private Eye.[36]

This profile is partly adapted from a Wikipedia entry on Robert Maxwell, available under the Creative Commons Attribution-ShareAlike License.