“Start with a growing market. Swim in a stream that becomes a river and ultimately an ocean. Be a leader in that market, not a follower, and constantly build the best products possible.”

Robert Norton Noyce (December 12, 1927 – June 3, 1990), nicknamed “the Mayor of Silicon Valley,” co-founded Fairchild Semiconductor in 1957 and Intel Corporation in 1968. He is also credited (along with Jack Kilby) with the realization of the first integrated circuit or microchip which fueled the personal computer revolution and gave Silicon Valley its name.[1][nb 1]

Active all his life, Noyce enjoyed reading Hemingway, flying his own airplane, hang gliding, and scuba diving. Noyce believed that microelectronics would continue to advance in complexity and sophistication well beyond its current state, leading to the question of what use society would make of the technology. In his last interview, Noyce was asked what he would do if he were “emperor” of the United States. He said that he would, among other things, “…make sure we are preparing our next generation to flourish in a high-tech age. And that means education of the lowest and the poorest, as well as at the graduate school level.”[2]

Noyce was born on December 12, 1927, in Burlington, Iowa[3][4][5][6][7] as the third of four sons[5] of the Rev. Ralph Brewster Noyce.[8] His father had graduated from Doane College (1915), Oberlin College (1920), and theChicago Theological Seminary (1923). He was also nominated for a Rhodes Scholarship.[9] The Reverend Noyce worked as a Congregational clergyman and as the associate superintendent of the Iowa Conference of Congregational Churches in the 1930s and 1940s.

His mother, Harriet May Norton, was the daughter of the Rev. Milton J. Norton, a Congregational clergyman, and of Louise Hill. She graduated from Oberlin College in 1921 and had dreamed of becoming a missionary prior to her marriage.[10] She has been described[by whom?] as an intelligent woman with a commanding will.[11]

Bob Noyce had three siblings: Donald Sterling Noyce, Gaylord Brewster Noyce and Ralph Harold Noyce.[5][12] His earliest childhood memory involved beating his father at ping pong and feeling absolutely shocked when his mother reacted to the thrilling news of his victory with a distracted “Wasn’t that nice of Daddy to let you win?” Even at the age of five, Noyce felt offended by the notion of intentionally losing at anything. “That’s not the game”, he sulked to his mother. “If you’re going to play, play to win!”[12]

In the summer of 1940, at the age of 12, he built a boy-sized aircraft with his brother, which they used to fly from the roof of the Grinnell College stables. Later he built a radio from scratch and motorized his sled by welding a propeller and an engine from an old washing machine to the back of it.[13] His parents were both religious but Noyce became an agnostic and irreligious in later life.[14]

He grew up in Grinnell, Iowa, and attended the local schools. He exhibited a talent for mathematics and science while in high school and took the Grinnell College freshman physics course in his senior year. He graduated from Grinnell High School in 1945 and entered Grinnell College in the fall of that year. He was the star diver on the 1947 Midwest Conference Championship swim team.[11] While at Grinnell College, Noyce sang, played the oboe and acted. In Noyce’s junior year, he got in trouble for stealing a 25-pound pig from the mayor of Grinnell’s farm and roasting it at a school luau. The mayor sent a letter home to Noyce’s parents stating that “In the agricultural state of Iowa, stealing a domestic animal is a felony which carries a minimum penalty of a year in prison and a fine of one thousand dollars.” So essentially, Noyce would have to be expelled from Grinnell College. Grant Gale, Noyce’s physics professor and the President of Grinnell College, did not want to lose a student like Robert who had so much potential. They were able to compromise with the mayor so that the college would compensate him for the pig, Noyce would only be suspended for one semester, and no further charges would be pressed. He returned to Grinnell in February 1949.[15] He graduated Phi Beta Kappa with a BA inphysics and mathematics from Grinnell College in 1949. He also received a signal honor from his classmates: the Brown Derby Prize, which recognized “the senior man who earned the best grades with the least amount of work”.[16]

While an undergraduate, Noyce attended a physics course of the professor Grant Gale and was fascinated by the physics. Gale got hold of two of the very first transistors ever to come out of Bell Labs and showed them off to his class and Noyce was hooked.[11][17][18] Grant Gale suggested that he apply to the doctoral program in physics at MIT, which he did.[19]

Noyce had a mind so quick that his graduate school friends called him “Rapid Robert.”[20] He received his doctorate in physics from Massachusetts Institute of Technology in 1953. 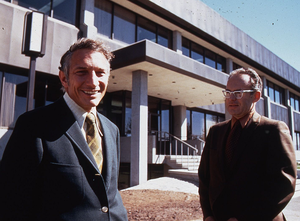 Robert Noyce and Gordon Moore in front of the Intel SC1 building in Santa Clara in 1970.

After graduating from the Massachusetts Institute of Technology in 1953, he took his first job as a research engineer at the Philco Corporation in Philadelphia. He left in 1956 for the Shockley Semiconductor Laboratory[21] in Mountain View, California.

He joined William Shockley, a co-inventor of the transistor and eventual Nobel Prize winner, at the Shockley Semiconductor Laboratory, a division of Beckman Instruments.

Noyce left with the “traitorous eight“[22] in 1957, upon having issues with respect to the quality of its management, and co-founded the influential Fairchild Semiconductor corporation. According to Sherman Fairchild, Noyce’s impassioned presentation of his vision was the reason Fairchild had agreed to create the semiconductor division for the traitorous eight.

Noyce and Gordon Moore founded Intel in 1968 when they left Fairchild Semiconductor.[20][23] Arthur Rock, the chairman of Intel’s board and a major investor in the company said that for Intel to succeed, Intel needed Noyce, Moore and Andrew Grove. And it needed them in that order. Noyce: the visionary, born to inspire; Moore: the virtuoso of technology; and Grove: the technologist turned management scientist.[24]The relaxed culture that Noyce brought to Intel was a carry-over from his style at Fairchild Semiconductor. He treated employees as family, rewarding and encouraging teamwork. His follow-your-bliss management style set the tone for many Valley success stories. Noyce’s management style could be called a “roll up your sleeves” style. He shunned fancy corporate cars, reserved parking spaces, private jets, offices, and furnishings in favor of a less-structured, relaxed working environment in which everyone contributed and no one received lavish benefits. By declining the usual executive perks he stood as a model for future generations of Intel CEOs.

At Intel, he oversaw Ted Hoff‘s invention of the microprocessor, which was his second revolution.[25][26]

This profile is partly adapted from a Wikipedia entry on Robert Noyce, available under the Creative Commons Attribution-ShareAlike License.