“Of all the things I’ve done, the most vital is coordinating those who work with me and aiming their efforts at a certain goal.”

Walter Elias “Walt” Disney (/ˈdɪzni/;[3] December 5, 1901 – December 15, 1966) was an American entrepreneur, cartoonist, animator, voice actor, and film producer. As a prominent figure within the American animation industry and throughout the world, he is regarded as a cultural icon,[4] known for his influence and contributions to entertainment during the 20th century. As a Hollywood business mogul, he and his brother Roy O. Disneyco-founded The Walt Disney Company.[5]

As an animator and entrepreneur, Disney was particularly noted as a filmmaker and a popular showman, as well as an innovator in animation and theme park design. He and his staff created numerous famous fictional characters including Mickey Mouse, Donald Duck, and Goofy. Disney himself was the original voice for Mickey. During his lifetime, he won 22 Academy Awards and received four honorary Academy Awards from a total of 59 nominations, including a record of four in one year,[6] giving him more Oscar awards and nominations than any other individual in history. Disney also won seven Emmy Awards and gave his name to the Disneylandand Walt Disney World Resort theme parks in the US, as well as the international resorts Tokyo Disney Resort, Disneyland Paris, Hong Kong Disneyland, and Shanghai Disney Resort.

Disney died from lung cancer on December 15, 1966, in Burbank, California. He left behind a vast legacy, including numerous animated shorts and feature films produced during his lifetime; the company, parks, andanimation studio that bear his name; and the California Institute of the Arts (CalArts). 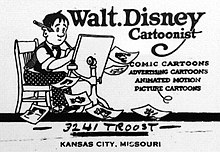 In January 1920, Disney and Iwerks formed a short-lived company called “Iwerks-Disney Commercial Artists”. However, following a rough start, Disney left temporarily to earn money at the Kansas City Film Ad Company. He was soon joined by Iwerks, who was not able to run their business alone.[34] While working for the company, where he made commercials based on cutout animation, Disney became interested in animation and decided to become an animator.[35] The owner of the Ad Company, A.V. Cauger, allowed him to borrow a camera from work to experiment with at home. After reading the Edwin G. Lutz book Animated Cartoons: How They Are Made, Their Origin and Development, Disney considered cel animation to be much more promising than the cutout animation he was doing for Cauger. He eventually decided to open his own animation business and recruited a fellow co-worker at the Ad Company, Fred Harman, as his first employee.[36] Disney and Harman then started creating cartoons called Laugh-O-Grams.[37] Disney studied Aesop’s Fables as a model. The first six of the new Laugh-O-Grams were modernized fairy tales.[38] They screened their cartoons at a local theater owned by Frank Newman, who was one of the most popular “showmen” in Kansas City.[37]

The studio produced its first TV special, One Hour in Wonderland, in 1950.[131] Disney began hosting a weekly anthology series on ABC entitled Disneyland, after the park, on which he aired clips of past Disney productions, gave tours of his studio, and familiarized the public with Disneyland as it was being constructed in Anaheim.[132] The show also featured a Davy Crockett miniseries (1954-1955), consisting of five one-hour episodes about the early 19th-century frontiersman Davy Crockett. The miniseries started the “Davy Crockett craze” among American youth, during which millions of coonskin caps and other Crockett memorabilia were sold across the country.[133]

In 1955, the studio’s first daily television show, The Mickey Mouse Club, debuted on ABC. It was a groundbreaking comedy/variety show catered specifically for children. Disney took a strong personal interest in the show and even returned to the animation studio to voice Mickey Mouse in its animated segments during its original 1955–59 production run.[134] The Mickey Mouse Club continued in various incarnations in syndication and on the Disney Channel into the 1990s.[135]

Disneyland finally opened on July 17, 1955, and was immediately successful. Visitors from around the world came to visit Disneyland, which contained attractions based on a number of successful Disney characters and films.[129]

After 1955, the Disneyland TV show was renamed Walt Disney Presents, with a logo featuring the closest representation of Disney’s actual signature (the current, well-known version of Walt’s signature in the company logo is actually based on a secretary’s stylization).[136] When the show upgraded from black-and-white to color in 1961, it changed its name to Walt Disney’s Wonderful World of Color, at the same time moving from the ABC network to NBC.[137] This eventually evolved into its most-recent form as The Wonderful World of Disney, airing on ABC, CBS, NBC, the Hallmark Channel, and the Cartoon Network via separate broadcast rights deals. During its run, the Disney series offered some recurring characters, such as the newspaper reporter and sleuth “Gallegher” played by Roger Mobley with a plot based on the writings of Richard Harding Davis.[138]

As the studio expanded and diversified into other media, Disney devoted less attention to the animation department, entrusting most of its operations to his key animators, whom he dubbed the Nine Old Men.[139] Although he was spending less time directly supervising the production of the animated films, he was always present at story meetings.[140] During Disney’s lifetime, the animation department created the successful Lady and the Tramp (the first animated film in CinemaScope) in 1955,[141] Sleeping Beauty (the first animated film in Super Technirama 70mm) in 1959,[142] One Hundred and One Dalmatians (the first animated feature film to use Xerox cels) in 1961,[143] and The Sword in the Stone in 1963.[144]

Production of short cartoons kept pace until 1956, when Disney shut down the responsible division, though special shorts projects continued for the remainder of the studio’s duration on an irregular basis. These productions were all distributed by Disney’s new subsidiary, Buena Vista Distribution, which had taken over all distribution duties for Disney films from RKO by 1955.[145]

Disney had already formed his own music publishing division in 1949 and in 1956. Partly inspired by the huge success of the television theme song “The Ballad of Davy Crockett“, he created a company-owned record production and distribution entity calledDisneyland Records.[146]

This profile is partly adapted from a Wikipedia entry on Walt Disney, available under the Creative Commons Attribution-ShareAlike License.