“In suggesting gifts: Money is appropriate, and one size fits all.”

William Randolph Hearst (/hɜrst/;[1] April 29, 1863 – August 14, 1951) was an American newspaper publisher who built the nation’s largest newspaper chain and whose methods profoundly influenced Americanjournalism.[2] Hearst entered the publishing business in 1887 after taking control of The San Francisco Examiner from his father. Moving to New York City, he acquired The New York Journal and engaged in a bitter circulation war with Joseph Pulitzer‘s New York World that led to the creation of yellow journalism—sensationalized stories of dubious veracity. Acquiring more newspapers, Hearst created a chain that numbered nearly 30 papers in major American cities at its peak. He later expanded to magazines, creating the largest newspaper and magazine business in the world.

He was twice elected as a Democrat to the U.S. House of Representatives, and ran unsuccessfully for Mayor of New York City in 1905 and 1909, for Governor of New York in 1906, and for Lieutenant Governor of New York in 1910. Nonetheless, through his newspapers and magazines, he exercised enormous political influence, and was famously blamed for pushing public opinion with his yellow journalism type of reporting leading the United States into a war with Spain in 1898.

His life story was the main inspiration for the development of the lead character in Orson Welles‘s film Citizen Kane.[3] His mansion, Hearst Castle, on a hill overlooking the Pacific Ocean near San Simeon, California, halfway between Los Angeles and San Francisco, was donated by the Hearst Corporation to the state of California in 1957, and is now a State Historical Monument and a National Historic Landmark, open for public tours. Hearst formally named the estate La Cuesta Encantada (“The Enchanted Hill”), though he typically referred to it simply as “the ranch.”

His paternal great-grandfather was John Hearst, of Scots-Irish origin. He emigrated to America from Ballybay, County Monaghan as part of the Cahans Exodus with his wife and six children in 1766 and settled inSouth Carolina.Their immigration to South Carolina was spurred in part by the colonial government’s policy that encouraged the immigration of Irish Protestants.[4] The names “John Hearse” and “John Hearse Jr.” appear on the council records of October 26, 1766, being credited with meriting 400 and 100 acres (1.62 and 0.40 km2) of land on the Long Canes (in what became Abbeville District), based upon 100 acres (0.40 km2) to heads of household and 50 acres (200,000 m2) for each dependent of a Protestant immigrant. The “Hearse” spelling of the family name never was used afterward by the family members themselves, or any family of any size. A separate theory purports that one branch of a “Hurst” family of Virginia (originally from Plymouth Colony) moved to South Carolina at about the same time and changed the spelling of its surname of over a century to that of the emigrant Hearsts.[5] Hearst’s mother, née Phoebe Elizabeth Apperson, was of Irish ancestry; her family came from Galway.[6] She was the first woman regent of University of California, Berkeley, funded many anthropological expeditions and founded the Phoebe A. Hearst Museum of Anthropology.

Following preparation at St. Paul’s School in Concord, New Hampshire, Hearst enrolled in the Harvard College class of 1885. While there he was a member of Delta Kappa Epsilon, the A.D. Club (a Harvard Final club), the Hasty Pudding Theatricals, and of theHarvard Lampoon before being expelled for antics ranging from sponsoring massive beer parties in Harvard Square to sending pudding pots used as chamber pots to his professors (their images were depicted within the bowls).[7] 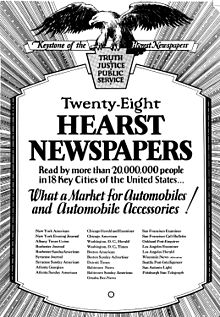 An ad asking automakers to place ads in Hearst chain, noting their circulation.

Searching for an occupation, in 1887 Hearst took over management of a newspaper, the San Francisco Examiner, which his father received in 1880 as repayment for a gambling debt.[8] Giving his paper a grand motto, “Monarch of the Dailies,” he acquired the best equipment and the most talented writers of the time, including Ambrose Bierce, Mark Twain, Jack London, and political cartoonist Homer Davenport. A self-proclaimed populist, Hearst went on to publish stories of municipal and financial corruption, often attacking companies in which his own family held an interest. Within a few years, his paper dominated the San Francisco market.

Early in his career at the San Francisco Examiner, Hearst envisioned running a large newspaper chain, and “always knew that his dream of a nation-spanning, multi-paper news operation was impossible without a triumph in New York.”[9] In 1895, with the financial support of his mother, he bought the failing New York Morning Journal, hiring writers like Stephen Crane and Julian Hawthorne and entering into a head-to-head circulation war withJoseph Pulitzer, owner and publisher of the New York World, from whom he “stole” Richard F. Outcault, the inventor of color comics, and all of Pulitzer’s Sunday staff as well.[10] Another prominent hire was James J. Montague, who came from the Portland Oregonian and started his well-known “More Truth Than Poetry” column at the Hearst-owned New York Evening Journal.[11]

When Hearst purchased the “penny paper,” so called because its copies sold for only a penny apiece, the Journal was competing with New York’s 16 other major dailies, with a strong focus on Democratic Party politics.[12]Hearst imported his best managers from the San Francisco Examiner and “quickly established himself as the most attractive employer” among New York newspapers. He was generous, paid more than his competitors, gave credit to his writers with page-one bylines, and was unfailingly polite, unassuming, “impeccably calm,” and indulgent of “prima donnas, eccentrics, bohemians, drunks, or reprobates so long as they had useful talents.”[13]

Hearst’s activist approach to journalism can be summarized by the motto, “While others Talk, the Journal Acts.”

This profile is partly adapted from a Wikipedia entry on William Randolph Hearst, available under the Creative Commons Attribution-ShareAlike License.