“A basic truth that the history of the creation of the transistor reveals is that the foundations of transistor electronics were created by making errors and following hunches that failed to give what was expected.”

William Bradford Shockley Jr. (February 13, 1910 – August 12, 1989) was an American physicist and inventor. Shockley was the manager of a research group that included John Bardeen and Walter Houser Brattain, the duo who invented the transistor. The three were jointly awarded the 1956 Nobel Prize in Physics.

Shockley’s attempts to commercialize a new transistor design in the 1950s and 1960s led to California’s “Silicon Valley” becoming a hotbed of electronics innovation. In his later life, Shockley was a professor at Stanfordand became a proponent of eugenics.[1][2]

Shockley was born in London, England, to American parents, and raised in his family’s hometown of Palo Alto, California, from age three.[3] His father, William Hillman Shockley, was a mining engineer who speculated in mines for a living, and spoke eight languages. His mother, Mary (née Bradford), grew up in the American West, graduated from Stanford University, and became the first female US Deputy mining surveyor.[4]

Shockley received his Bachelor of Science degree from Caltech in 1932. Shockley received his Ph.D. degree from MIT in 1936. The title of his doctoral thesis was Electronic Bands in Sodium Chloride. His thesis topic was suggested by his thesis advisor, John C. Slater.[5] After receiving his doctorate, Shockley joined a research group headed by Clinton Davisson at Bell Labs in New Jersey. The next few years were productive ones for Shockley. He published a number of fundamental papers on solid state physics in Physical Review. In 1938, he got his first patent, “Electron Discharge Device”, on electron multipliers.[6]

When World War II broke out, Shockley became involved in radar research at the Bell labs in Manhattan, New York. In May 1942, he took leave from Bell Labs to become a research director at Columbia University’s Anti-Submarine Warfare Operations Group.[7] This involved devising methods for countering the tactics of submarines with improved convoying techniques, optimizing depth charge patterns, and so on. This project required frequent trips to the Pentagon and Washington, where Shockley met many high-ranking officers and government officials. In 1944, he organized a training program for B-29 bomber pilots to use new radar bomb sights. In late 1944 he took a three-month tour to bases around the world to assess the results. For this project, Secretary of War Robert Patterson awarded Shockley the Medal for Merit on October 17, 1946.[8]

In July 1945, the War Department asked Shockley to prepare a report on the question of probable casualties from an invasion of the Japanese mainland. Shockley concluded:

If the study shows that the behavior of nations in all historical cases comparable to Japan’s has in fact been invariably consistent with the behavior of the troops in battle, then it means that the Japanese dead and ineffectives at the time of the defeat will exceed the corresponding number for the Germans. In other words, we shall probably have to kill at least 5 to 10 million Japanese. This might cost us between 1.7 and 4 million casualties including 400,000 to 800,000 killed.[9]

This report influenced the decision for the atomic bombings of Hiroshima and Nagasaki to force Japan to surrender without an invasion.[10]

Shockley was first to propose a lognormal distribution to model the creation process for scientific research papers.[11] He was an atheist.[12]

Shortly after the end of the war in 1945, Bell Labs formed a solid state physics group, led by Shockley and chemist Stanley Morgan, which included John Bardeen, Walter Brattain, physicist Gerald Pearson, chemist Robert Gibney, electronics expert Hilbert Moore, and several technicians. Their assignment was to seek a solid-state alternative to fragile glass vacuum tube amplifiers. Its first attempts were based on Shockley’s ideas about using an external electrical field on a semiconductor to affect its conductivity. These experiments failed every time in all sorts of configurations and materials. The group was at a standstill until Bardeen suggested a theory that invoked surface states that prevented the field from penetrating the semiconductor. The group changed its focus to study these surface states and they met almost daily to discuss the work. The rapport of the group was excellent, and ideas were freely exchanged.[13]

By the winter of 1946 they had enough results that Bardeen submitted a paper on the surface states to Physical Review. Brattain started experiments to study the surface states through observations made while shining a bright light on the semiconductor’s surface. This led to several more papers (one of them co-authored with Shockley), which estimated the density of the surface states to be more than enough to account for their failed experiments. The pace of the work picked up significantly when they started to surround point contacts between the semiconductor and the conducting wires with electrolytes. Moore built a circuit that allowed them to vary the frequency of the input signal easily. Finally they began to get some evidence of power amplification when Pearson, acting on a suggestion by Shockley, put a voltage on a droplet of glycol borate (a viscous chemical that did not evaporate, commonly used in electrolytic capacitors, and obtained by puncturing an example capacitor with a nail, using a hammer) placed across a P-N junction.[14] 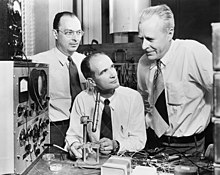 Bell Labs’ attorneys soon discovered Shockley’s field effect principle had been anticipated and devices based on it patented in 1930 by Julius Lilienfeld, who filed his MESFET-like patent in Canada on October 22, 1925.[15][16]Although the patent appeared “breakable” (it could not work) the patent attorneys based one of its four patent applications only on the Bardeen-Brattain point contact design. Three others (submitted first) covered the electrolyte-based transistors with Bardeen, Gibney and Brattain as the inventors. Shockley’s name was not on any of these patent applications. This angered Shockley, who thought his name should also be on the patents because the work was based on his field effect idea. He even made efforts to have the patent written only in his name, and told Bardeen and Brattain of his intentions.[17]

Shockley, angered by not being included on the patent applications, secretly continued his own work to build a different sort of transistor based on junctions instead of point contacts; he expected this kind of design would be more likely to be commercially viable. The point contact transistor, he believed, would prove to be fragile and difficult to manufacture. Shockley was also dissatisfied with certain parts of the explanation for how the point contact transistor worked and conceived of the possibility of minority carrier injection. On February 13, 1948 another team member, John N. Shive, built a point contact transistor with bronze contacts on the front and back of thin wedge of germanium, proving that holes could diffuse through bulk germanium and not just along the surface as previously thought.[18]:153[19]:145 Shive’s invention sparked[20] Shockley’s invention of the junction transistor.[18]:143 A few months later he invented an entirely new, considerably more robust, type of transistor with a layer or ‘sandwich’ structure. This structure went on to be used for the vast majority of all transistors into the 1960s, and evolved into the bipolar junction transistor. Shockley later admitted that the workings of the team were “mixture of cooperation and competition.” He also admitted that he kept some of his own work secret until his “hand was forced” by Shive’s 1948 advance.[21] Shockley worked out a rather complete description of what he called the “sandwich” transistor, and a first proof of principle was obtained on April 7, 1949.

Meanwhile, Shockley worked on his magnum opus, Electrons and Holes in Semiconductors which was published as a 558-page treatise in 1950. The tome included Shockley’s critical ideas of drift and diffusion and the differential equations that govern the flow of electrons in solid state crystals. Shockley’s diode equation is also described. This seminal work became the reference text for other scientists working to develop and improve new variants of the transistor and other devices based on semiconductors.[22]

This resulted in his invention of the junction transistor, which was announced at a press conference on July 4, 1951.[23]

In 1951, he was elected a member of the National Academy of Sciences (NAS). He was forty-one years old; this was rather young for such an election. Two years later, he was chosen as the recipient of the prestigious Comstock Prize[24] for Physics by the NAS, and was the recipient of many other awards and honors.

The ensuing publicity generated by the “invention of the transistor” often thrust Shockley to the fore, much to the chagrin of Bardeen and Brattain. Bell Labs management, however, consistently presented all three inventors as a team. Though Shockley would correct the record where reporters gave him sole credit for the invention,[25] he eventually infuriated and alienated Bardeen and Brattain, and he essentially blocked the two from working on the junction transistor. Bardeen began pursuing a theory for superconductivity and left Bell Labs in 1951. Brattain refused to work with Shockley further and was assigned to another group. Neither Bardeen nor Brattain had much to do with the development of the transistor beyond the first year after its invention.[26]

In 1956 Shockley moved from New Jersey to Mountain View, California to start Shockley Semiconductor Laboratory to live closer to his ailing mother in Palo Alto, California.[27][28] The company, a division of Beckman Instruments, Inc., was the first establishment working on silicon semiconductor devices in what came to be known as Silicon Valley.

“His way” could generally be summed up as domineering and increasingly paranoid. In one well-known incident, he claimed that a secretary’s cut thumb was the result of a malicious act and he demanded lie detector tests to find the culprit.[29] After he received the Nobel Prize in 1956 his demeanor changed, as evidenced in his increasingly autocratic, erratic and hard-to-please management style.[30] In late 1957, eight of Shockley’s researchers, who would come to be known as the “traitorous eight“, resigned after Shockley decided not to continue research into silicon-based semiconductors.[31] They went on to form Fairchild Semiconductor, a loss from which Shockley Semiconductor never recovered. Over the course of 20 years, these eight of Shockley’s former employees started 65 new enterprises.[32]

This profile is partly adapted from a Wikipedia entry on William Shockley, available under the Creative Commons Attribution-ShareAlike License.