Adolphus Busch (10 July 1839 – 10 October 1913) was the German-born co-founder of Anheuser-Busch with his father-in-law, Eberhard Anheuser. He introduced numerous innovations, building the success of the company in the late 19th and early 20th centuries. He became a philanthropist, using his great wealth for education and humanitarian needs. His great-great-grandson, August Busch IV is now on the board of Anheuser-Busch InBev.

Busch was born in Mayence-on-the-Rhine on July 10, 1839, the youngest of 21 sons of Ulrich Busch and Barbara Pfeiffer.[2] The city was in Kastel, then a district of Mainz in the Grand Duchy of Hesse. His wealthy family ran a wholesale business of winery and brewery supplies. Busch and his brothers all received quality educations, and he graduated from the notable Collegiate Institute of Belgium in Brussels.[2]

At the age of 18, Busch emigrated in 1857 with three of his older brothers to St. Louis, Missouri;[2] which was a major destination for German immigrants in the nineteenth century. His brother Johann established a brewery in Washington, Missouri; Ulrich, Jr, married a daughter of Eberhard Anheuser in St. Louis and settled in Chicago; and Anton was a hops dealer who later returned to Mainz.

Busch’s first job in St Louis was working as a clerk in the commission house. He was also an employee at William Hainrichshofen’s wholesale company. During the American Civil War Busch served in the Union Army for 14 months. During this period, he learned that his father had died and he had inherited a portion of the estate.

In 1865, Busch acquired a brewery in St. Louis.[3] It was his father-in-law’s Anheuser Brewery and started working there. At the death of Eberhard Anheuser in 1880, Busch became president of the business and changed the name to “Anheuser Busch Company”. Busch became wealthy and financially independent due to the success of the Anheuser Brewery. In 1891, he bought from Carl Conrad the trademark and name Budweiser. He envisioned a national beer with universal appeal. His work was distinguished by his “timely adoption of important scientific and technological innovations, an expansive sales strategy geared largely toward external domestic and international population centers, and a pioneering integrated marketing plan that focused on a single core brand, Budweiser, making it the most successful nationally-distributed beer of the pre-Prohibition era.”[4]

The Adolphus Hotel in Dallas, Texas.

To build Budweiser as a national beer, Busch created a network of rail-side ice-houses and launched the industry’s first fleet of refrigerated freight cars.[2] However, throughout his life, he referred to his beer as “that slop” and preferred wine to drink.[citation needed] [5]

When Busch implemented pasteurization as a way to keep the beer fresh for longer periods of time, his company was able to profit from shipping beer across the country. Busch was an early adopter of bottled beer and founded the Busch Glass Company[2] to make bottles for his product. In 1901 sales surpassed the one million barrels of beer benchmark.

Busch served as the president of the South Side Bank and the Manufacturers Railway.[2][6] He had helped organize the latter as a short-line rail serving local industry. He also was a Director of the Louisiana Purchase Company.[2] Like other business leaders, he served as a director of the 1904 World’s Fair in St. Louis, contributing to civic efforts.[4]

Busch invested in new buildings and businesses in Dallas, Texas, which was growing rapidly in the early 20th century as an industrial city. In 1912, Busch constructed the Adolphus Hotel there as the tallest building in the state.Another was the Busch Building, which has been adapted as the Kirby Residences, and is located at 1509 Main St. It is a National Historic Landmark.

From his early years, Busch contributed generously to charitable and education needs. With a lifelong interest in his homeland, he assisted in repairing devastation from the 1882 flooding of Kastel-Mainz by the Rhine River. He donated $100,000 to San Francisco after the 1906 earthquake- $50,000 personally and $50,000 from his company.[4]

Busch contributed a total of $350,000 to Harvard to endow a Germanic museum, named Adolphus Busch Hall.[2]

Busch married Lilly Eberhard Anheuser, the third daughter of Eberhard Anheuser, on 7 March 1861 in St. Louis, Missouri.[2] They had thirteen children; eight sons, including Adolphus Busch II, August Anheuser Busch I and Carl Busch, and five daughters. The Busches often traveled to Germany where they bought a castle. They named it the Villa Lilly for Mrs Busch. It was located in Lindschied near Langenschwalbach, in present-day Bad Schwalbach.[2] 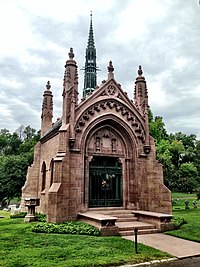 Busch died in Lindschied in 1913 while on vacation. He had been suffering from dropsy since 1906.[2] He was survived by his widow, five daughters and two sons, August A. and Carl Busch, both of St. Louis.[2] His body was brought back to the United States in 1915 by ship, and transported by train to St. Louis. He was buried in Bellefontaine Cemetery in St. Louis.

This profile is partly adapted from a Wikipedia entry on Adolphus Busch, available under the Creative Commons Attribution-ShareAlike License.